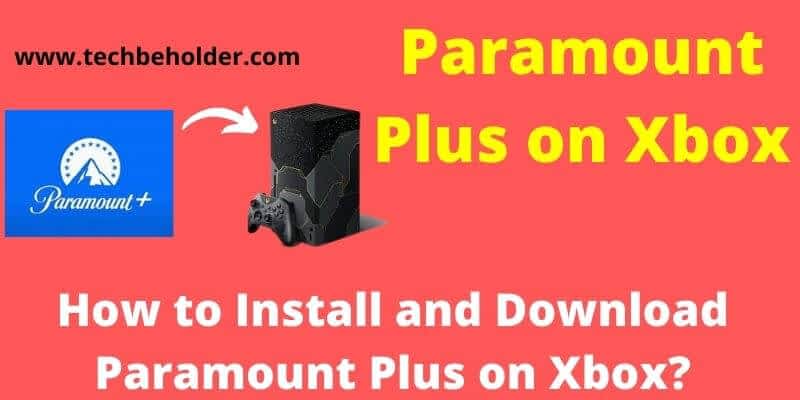 Paramount Plus On Xbox: If you’ve enabled yourself with Xbox and wondering what other thing Xbox can do other than playing games? Well, Xbox is more than a gaming console, it can play various types of streaming apps on it such as Paramount+.

This detailed guide will explain how you can enjoy the extensive library of games and limitless live streaming services at the same time by signing up paramount plus on Xbox.

Through this platform, we have tried to resolve all of your queries related to how to get the most out of your Xbox by using paramount plus.

Paramount+ is a subscription-based OTT platform that enables you to stream a vast range of video content on different types of devices such as PS 5 and Xbox.

If you are seeking How To Install & Watch Paramount Plus On PS5 here is the complete guide. Paramount Plus platform is owned and operated by a division of ViacomCBS.

Apart from these exciting contents it also enables streaming on up to 3 devices simultaneously, a parent control feature, and a 7-day free trial option.

That’s the basics about the Paramount + app, now let’s move to the main topic and learn how to get and install Paramount Plus on Xbox with a step-by-step guide.

Also Read: How To Watch TinyZone On Roku

Can It Get Paramount Plus App On Xbox?

Paramount plus is a live streaming service that can be used to watch on-demand content. It has several components; one of the broad appealing features is a 24/7 live feed on local CBS stations with premium plans.

You can say it’s a rebranding of CBS All Access, nothing much more than a name change.

Microsoft Xbox has recently added new support for gamers so they can enjoy games plus live streaming of their favorite shows at the same time.

Certainly by signing up for paramount plus on Xbox one can enjoy his favorite shows, sports highlights, recording of matches, versatility in games, live news, and much more in other words paramount plus is your one-stop destination.

Compatibility of Paramount Plus on Xbox?

If you have Xbox 360, Unfortunately, you can’t enjoy live streaming service plus on-demand content because Paramount Plus is not compatible with Xbox 360. However, We’ve tips that you can still use Paramount on your Xbox 360 console.

Only these Xbox are capable of streaming content from Paramount+. But the question that arises is how you can get and stream Paramount+ content on your supportable Xbox device? Here is the step guide.

How to Stream Paramount Plus on Xbox?

Two methods enable you for this, once you’ve completed your sign-up steps.

Depends on your choice of which method you want to adopt to stream on your Xbox.

Also Read: How To Mirror iPhone To Samsung TV

Streaming by Paramount Plus

You can sign up without using your credentials and a hassle-free instant activation of paramount plus on the Xbox console easily. By getting along with these steps you can simply get a paramount plus subscription.

How To Install Paramount Plus on Xbox

Now you can stream Everest of Entrainment by Paramount Plus on Xbox console devices.

Miracast Paramount Plus on Xbox by iOS Devices

Recently Wi-Fi Alliances launched a new technology of Miracast (wireless display on large screens) and the latest version of Xbox consoles supports this feature, let’s go through the steps by which you can Screen Mirror your paramount+ on Xbox with the help of iPad/iPhone effortlessly.

Mirror Cast Paramount Plus on Xbox by Android Devices:

The below steps will enable you to stream your Paramount content on your Xbox using the Cast feature.

Also Read: How To Turn On WiFi On LG TV

Also Read: Why Is My Firestick Remote Not Working

Tricks To Enjoy Paramount+ App On Your Xbox 360

Attention: Before you try this method, ensure to turn on your connected device feature from console settings.

How to Cancel Paramount+ Plus on Xbox?

To cancel Paramount plus on your Xbox, all your need to follow below steps;

Note: In case you chose another platform to subscribe Paramount+ such as Google Play Store, Amazon, App Store, or Roku, then skip these steps and move the that platform and cancel subscription.

#1. Can you get Paramount Plus on Xbox Australia?

Yes, definitely you can get it Looking at their supported regions there are 42 countries .its not even a quarter of all countries in the world The regions served by Paramount Plus are Canada, Australia Latin America Middle East, and many more countries will be supported soon.

#2. Is Paramount+ free with Amazon Prime?

Paramount Plus has a free trial for 7 seven, after that, you have to subscribe to either their Standard Plan or Premium Plan. According to your budget and yes Amazon Prime also offers a 7 days free trial with Paramount Plus.

#3. Can not get Paramount Plus on Xbox One?

After completing the installation still, you are not able to stream Paramount Plus on Xbox. Hold on the Power button until your Xbox shuts down and wait 30 seconds to turn it on back. You will have the app connected to your Xbox.

Paramount Plus app has a vast library of millions of episodes, various original programs, great collections of movies, and kids’ entertainment content. In short, audiences of all ages can get entertainment. It can be used on up to 3 devices simultaneously and allows streaming of 40k HDR with Premium sound.

The best feature of Paramount+ on Xbox is parental control. Parents can allow only those category programs that suit their child’s age and ids are not able to change its setting on their own.

After reading this post you’ll be pretty much familiar with how to install Paramount Plus on Xbox without any hassle. I hope these steps may help you to install and watch Paramount+ on Xbox still if you have doubts you can count on us at any time. Thanks for the sparkling moments in this article.